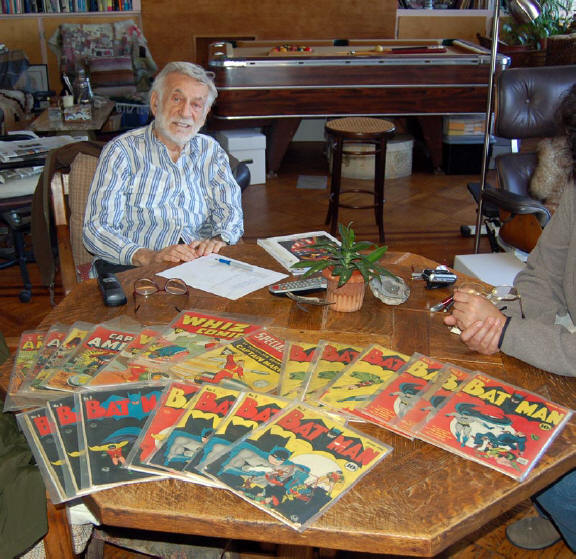 Jerry Robinson 1/1/1922 - 12/7/2011 an accomplished artist, writer, historian and curator.  He was President and Editorial Director of CartoonArts International Inc. and Cartoonists and Writers Syndicate (CWS)- affiliated with the New York Times Feature Service, which syndicates and exhibits the work of 350 leading cartoonists and graphic artists from seventy five countries.

While a journalism student at Columbia University, Robinson began his cartooning career at age 17 on the original Batman Comic books, for which he created the Joker, comics’ first super villain.  Robinson played a key role in the success of Batman, naming Batman’s ward, Robin, and designing his costume.  Robinson is ranked among the 100 greatest comic book artists of all time.  He is also credited with “defining Batman’s look and tone.”  Robinson’s series of superbly designed covers added “depth and visual pizzazz” to Batman. In addition to being historic,  many of his covers are still considered “classics”.

Robinson’s diverse career afforded him the opportunity to work with, befriend and interview a diverse and unparralled array of talent from the medium. The Robinson Collection, assembled over 67 years, is unique in its coverage of the nucleus and origins of comic books. It is a collection that was assembled with the goal of becoming a resource for public appreciation and study by historians now and in the future.

Robinson served as president of both the Association of American Editorial Cartoonists (AAEC) and the National Cartoonists Society (NCS), the only person so honored by his peers.  He is a member of the Board of Trustees of the National Cartoon Museum (NCM) and serves as Chairman of its international Advisory Board.  He also served as advisor to the Museum Cartoon, Basel, Switzerland and was the guest at museums in Warsaw, Brussels, Angouleme (France) and three in Japan.

Robinson traveled to over forty countries on behalf of CWS, as well as serving on international art juries and acquiring works by major creators for the NCM.  He has also made several tours of Europe, North Africa, Japan and Korea entertaining service men.

His award wining features of social/political satire, still life and Life With Robinson, were an internationally syndicated daily for thirty two years.  Robinson’s drawings appeared monthly in the Broadway theatre magazine Playbill.  He is the co-writer and art director of the hour long animation, Stereotypes, filmed at he Soyuzmult Studios in Moscow and co author of the musical Astra: A Comic Book Opera.  A graphic novel adaptation of Astra was published in Japan and the USA.

Robinson has curated numerous exhibitions in the US and abroad.  They include the first show of American comic art at a major fine art gallery, the Graham Gallery in New York (1972), and served as special consultant for the largest exhibition of he cartoon at the Kennedy Center, Washington, DC and for the landmark show of the cartoon arts at the Whitney Museum, New York City.  Exhibitions abroad include the first of American cartoon art in Tokyo, Taipei, Warsaw, and Moscow: and others in Portugal, Slovenia and Ukraine.  At the invitation of the United Nations, Robinson produced the major exhibitions in Rio de Janeiro (Earth Summit), Cairo (Population and Development) and Vienna (Human Rights), the later co-sponsored by the Austrian Government and Amnesty International.  In 2004 he curated the first in-depth exhibition of the genre, The Superhero: The Golden Age of Comic Books 1939-1950 at the Breman Museum, Atlanta.

Robinson led creator rights cases including copyright, trademark, censorship, First Amendment (in US) and human rights (abroad).  Examples include: representing Joe Shuster and Jerry Siegel, creators of Superman, in their struggle to obtain financial security and restore their creator credits to Superman; obtaining the release of a jailed and tortured cartoonists in Uruguay and the Soviet Union: writing briefs on behalf of the AAEC and NCS, one in the trademark litigation brought against editorial cartoonists and the other presented before a US Senate committee on postal laws; and serving on the joint arts committee that negotiated creator protection in the renewal of the copyright law.

For eighteen years Robinson was on the faculty of the School of Visual Arts, The New School and Parsons School of Design in New York City.  An exhibition of his color photography from seven countries was held at the SVA Galleries.  In 2000 Scriptorium Films produced a ninety minute television documentary on Robinson’s career for Brazilian TV.

A legend in the field and a real life Super Hero!

All Star's popular online auctions feature Original Comic Art, Animation Art, Toys, Premiums, Posters, Late Additions Art, Late Additions Books, as well as many other types of items.
What Our Customers Say:
I have been collecting original comic art for almost 15 years. All Star Auctions is not only an amazing source for high-end/ key historical pieces but also through the years, Joe and Nadia have provided priceless counsel and collecting perspective. I trust them to buy from them. I trust them to sell my original art as well.

-David Mandel, Executive Producer Curb Your Enthusiasm
Joe and Nadia Mannarino, proprietors of All Star Auctions, have helped me shape and improve my personal collection of original comic art and other comic character collectibles. Often guided by their integrity, knowledge and experience, I've made better decisions and better deals!